For those members of the human race who can't go a week without fantasizing about how cool it would be if a sub-compact car was to skewer itself on the trailer hitch of their pickup or SUV, I've put together this page to free your imagination for more productive use, and to convince you that trailer hitches should be removed from the receiver when not being used.

Following are pics of my beloved Ford Escort Wagon after I hit a Ford F-250 Super Duty pickup truck late one Friday evening while visiting relatives in Austin, Texas.  The accident was my fault, as I took my eyes off the vehicle ahead of me to rubber neck the slow moving pavement striping vehicle which we were passing at the time, at roughly 8 MPH.

And yes it's true, I did have a chrome frame on my front plate, not for vanity purposes, but to shield the sharp edges of the license plate from some unsuspecting knee or shin.  This is the responsible mindset which more folks should embrace. 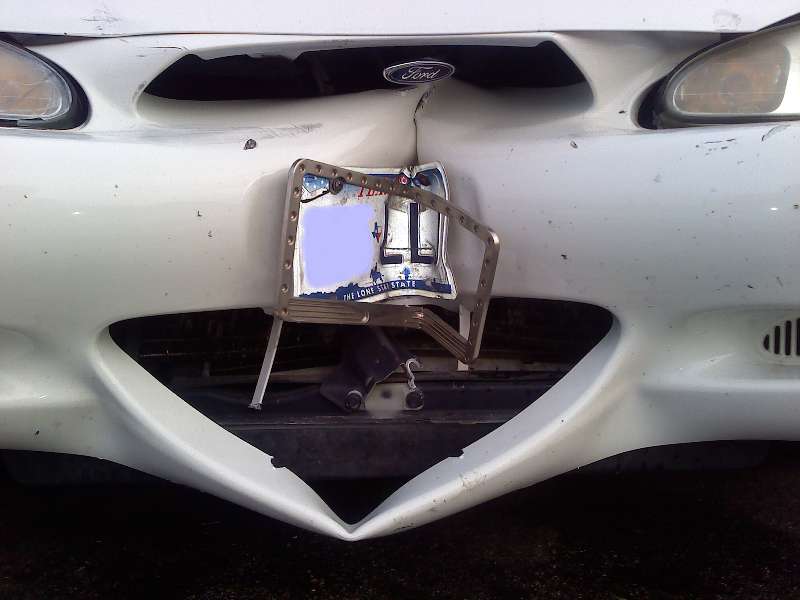 In spite of the slow speed of the collision, concentrating the force in this un-natural way set off both of the air bags... 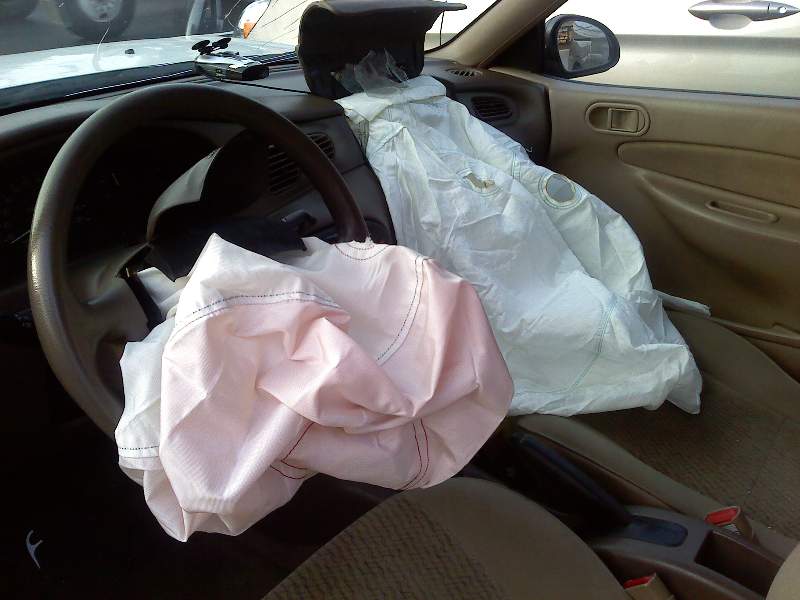 which forced the cover of the passenger side bag violently upward, busting my windshield.  Cost wise, the damage to the air bags and windshield was sufficient in and of itself to total out my Escort.  The Ford pickup sustained a very small amount of white paint on it's trailer hitch, no damage to its bumper, and the driver barely knew he'd been hit. 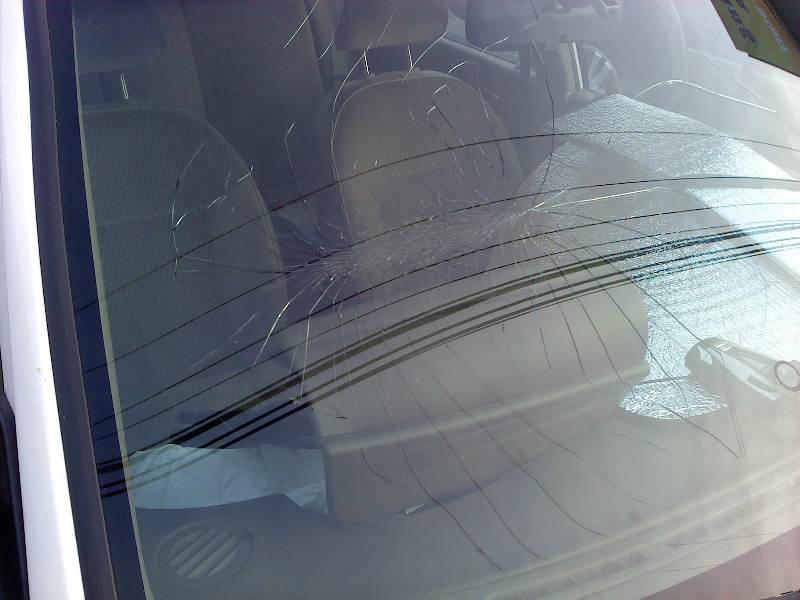 If you're doubting the speed involved, note the perfect seem between the front frender and the door.  That's right, the speed was so slow that the fenders were NOT driven back AT ALL... 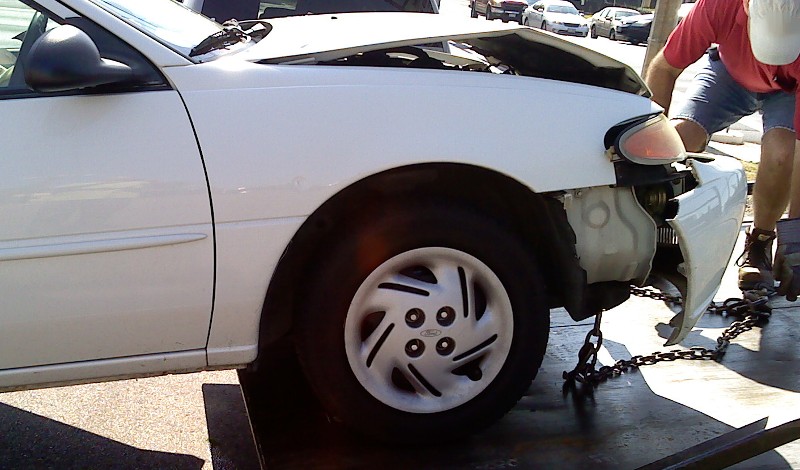 which is consistent with the fact that the back of the hood was NOT forced back past it's pre-accident point. 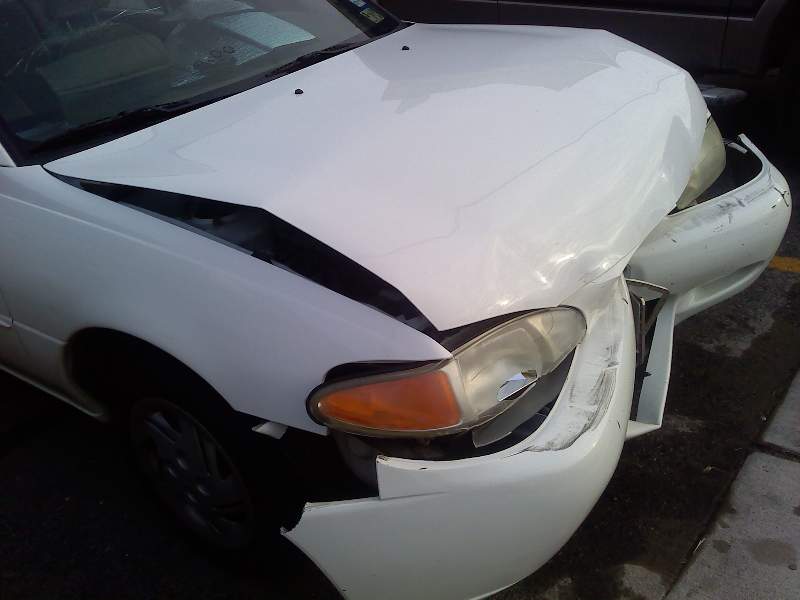 The above view shows that this wasn't a standard trailer hitch, but was instead one of the extra long model favored by drivers of today's pick up trucks and sports utility vehicles.

The bottom line here is that my sub-compact vehicle was damaged to the point of selling off for parts, and it was all so needless.  Just a classic case of carelessness at best, and at worst the driver never actually towed anything, but mounted a hitch so as to insure that his bumper was protected, which is anti-social behavior to the point of almost being criminal, IMHO.

Without the trailer hitch, the Escort's energy absorbing bumper would have done it's job, saving the Escort's windshield and air bags.  Sure, I'd have had to pay for repair of the largely cosmetic damage to the pickup's static bumper, plus some repair to my vehicle's hood, but the total cost wouldn't have exceeded $1,500.00, and I'd still be driving my Escort now, which was maintained pretty much by the book, as documented by the following service history compiled from the receipts which I had on hand:

Hopefully this page will open your minds to the fact that sub-compact vehicles are often times loved and needed as much by their owners as pickups and suv's are loved and needed by their owners.  Whether you drive a Chevy, a Dodge, a Ford, a Toyota, or even a Nissan, do the right thing here, and pull off that trailer hitch between uses.

Thanks for your time.