In the game of pigskin football,

I've studied every player in The Hall.

Take those chosen to lead the attacks,

I'm referring to the quarterbacks.

Many qualities are found in the best,

But clearly one ranks above the rest.

The QB's who deserve the most praise,

Are the ones who call their own plays.

In the real world, attorneys must do,

What their paying clients tell them to.

Exceptions arise if work is pro-bono.

With a story which would leave voters bothered.

One lawyer felt that, amongst his duties,

Was shutting up this actress, from the nudies. 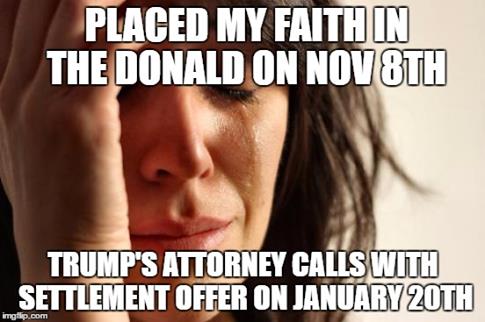 The lawyer got her to agree to a pact.

An exhibition of true self reliance.

But it takes lots of cash to buy silence.

Pawning his home is how money was raised.

Getting paid back didn't seem to have him phased.

Decades from now, in Poly-Sci, will be taught,

This case study on how elections are fought.

But there are certain times when lay henchmen,

Are required to do what lawyers recommend.

Are as toxic as nuclear radiation.

When clients need lawyers to baby-sit,

Recordings must be locked up, lickety split.

Unless transcripts show the purpose was benign,

Others in the room should lawyer up, and resign.

Only one has the quality that puts him at the top.

But it's not a burning drive which never let's him stop.

He makes other fixers simply scratch their heads,

Intrigued as to why it is, that Rudy isn't dead.

At the very least, of common sense he has taken leave.

Hanging out, for months on end, primarily in Kyiv.

While telling the world that Ukraine has evidence,

That he still breaths, makes us question certain facts.

Yeah, Ukrainians are actually chill to the max.

Should I suggest bourbon causes cancer, in Kentucky,

I would do it 3 whole days, that's if I were lucky.

I'm thinking, "He poked the bear!" would be my epitaph,

Even if The Pres' made clear that I worked on his behalf.

Lawyer's know that setting up LLC's,

Is helpful when clients wish to make decrees.

And if peach ambassadorships are bought,

Multiple fake firms make it hard to get caught.

What's an unqualified swamp creature to do?

Being a liege's Ukrainian presence,

So our Commander in Chief's rep is protected,

Taking one for the team is expected.

Don't question if Trump thinks that it's great.

Final drafts are posted under one name,

So his loyal fans think they're one and the same.

These are four examples of why, these days,

The greatest lawyers call their own plays.

PS - I sometimes include what I call "poetic remnants" following a work.  These are passages which didn't make the cut, for whatever reason.

Here's a poetic remnant from this poem:

I keep lots of one's, because there's a chance,

Stormy could stop in the Bluegrass to dance.

Unlike sessions on screen, or with The Donald.

Alright.  Thanks for your time and consideration.