What is "Progressive Listening"?

First off, my pet peeve, musically speaking, occurs when one says:

Without first pondering the question:

This considerable additional mental effort is what distinguishes the sophisticated music listener from the average listener.

But this difference is not the definition of "Progressive Listening".

"Progressive Listening" is listening to music as it is created in the studio, instead of as if it were being performed live.

Now for a little history review.  For many years a song was recorded in the studio in pretty much the same way that it was performed live.  The producer got everybody together in the studio and performed the song a few times, and then, after a little cleanup work, the best effort went to wax or vinyl or whatever.  Then came multi-track recording devices which allowed each contributor of a song to individually come in to the studio and lay down his track, usually in the presence of the engineer and the song's producer.  I understand that The Beetle's and their Apple organization elevated this type of recording to the standard which it is today, and I can't help but wonder how much of that was influenced by the "falling apart" which The Beetle's were experiencing in the later '60's.  Or maybe they fell apart because they enjoyed less of the full band interaction of their earlier years?  You know, the chicken or egg question!  Or maybe it was simply Linda and Yoko who were to blame...but I doubt it?

Anyway, the point is that today, more times than not, music is recorded in the studio one track at a time on a multi-track recording device, with the song's producer (and engineer) at the controls.  Individual artists can contribute multiple tracks to the same song, such as a guitarist can first lay down the rhythm track, come back in the next day to lay down the lead guitar track, and then go back into the studio 2 months later and overdub a third track of additional rhythm guitar work.  All done with the other band members vacationing in Aruba.  Heck, there are some artists who do literally every single track themselves, laying down the keyboards, vocals, guitars, bass, and percussion in the studio in this track by track fashion, usually over a period of many weeks or even months.

This is why it is almost unrealistic to expect a live performance to exactly mirror the studio effort.  They are two distinctly different animals.  Yet the average person listens to virtually every song as if they were listening to a live performance.

Again, "Progressive Listening" is listening to music as it is created in the studio...one track at a time.

But why call it "Progressive Listening"?  Initially, music was produced with a lead instrument in mind, and it was understood that all other instruments were involved simply to support the lead instrument.  What was the lead instrument?  It could be trumpet of Herb Albert, or the vocals of Elvis or Tony Bennett, or the clarinet of Pete Fountain, or the piano of Floyd Cramer.  In this reality, the listener focused critically on the lead instrument.  As the "supporting" instruments were not expected to provide much more than mere support, so the listener couldn't really focus critically on supporting performance.  The sophisticated listener realizes that the supporting musician could probably add more to his own performance, but was probably instructed not to do so by the song's producer, who was more focused on support of the lead instrument.  An excellent current day example of this is the band U2, where you have Bono's remarkable vocals supported by a pure rhythm guitarist, a sub par bass player, and a very limited drummer.  Bono's voice is the only lead instrument, so much so that even the instrumental bridges (sample) are basically rhythm oriented.  But that is not entirely a bad thing, because it is the secret as to why U2 is such a great LIVE band.  This approach translates far easier from the studio to the stage...and invites other groups to make a pass at covering their songs, which if fine for any group which writes their own music.

Back in the late '60's a type of music emerged which changed the rules.  So called "Super Groups" formed which brought together the most of each instrument-the most talent and the most ego.  These bands were:

then add to these the "power trios" which seemed to require more of each instrument to provide the total sound required of a rock band.  These include:

The technique of the producers of the songs of these bands seemed to change from limiting the supporting instruments to an "elevation of the supporting instruments" mindset which encouraged the contributions of the supporting musicians.  The resulting songs were unique in that the listener could focus on a supporting track, say the bass line, and feel satisfied that the bassist was giving his or her best effort, as opposed to being held back by the producer, or the other members of the band, or simply being held back by the musicians own lack of talent and/or imagination and/or desire to be innovative.

But a key point here is that the music of these groups, while complete in talent, were still pretty much one solo at a time (or one lead instrument at a time) efforts.  You get a guitar intro, followed by lead vocals, followed by drum solo, then a guitar solo for a bridge, then a bass solo leading into the closing vocals and another guitar solo to fade out.  Great stuff, but still pretty much one lead instrument at a time. 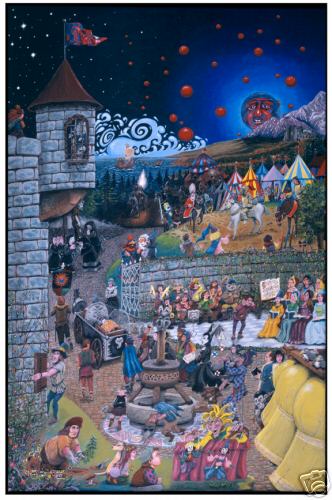 But I derived the name "Progressive Listening" from the term "Progressive Rock."  This is music of, amongst many others, the following groups:

Image Credit:  Artist Neal Warner's "In the Court of the Crimson King"

Anyway, at it's best, "Progressive Rock" is very eclectic in both sound and feel and message, mostly because the talent range of the band members and chosen contributors is so wide.  I mean, if the producer called out from his console: "Let's do it again, shall we, and this time what do you think about giving the bridge a bit of a 'Ragtime' flavor," you can bet the group will have a clue as to what the producer is trying to achieve-and how to make it happen.  Make no mistake, these are not garage bands, but are serious musicians who-generally speaking-can read music, and are not ashamed of the fact that they have taken music lessons.

The ultimate "Progressive Rock" consists of layers of lead efforts, each as significant as the other parts, usually distinguished only by the volume which the producer chose to give the track for each instrument.  For an example of what I'm talking about, look to the scherzo 2nd movement of Beethoven's 9th, or the 4th movement to Mozart's "Jupiter" 41st, or if these happen to be missing from your CD collection, just pull out your copy of "Muscle of Love" by Alice Cooper for another fine sample.  (Sorry not much by Faith Hill or Michael Jackson applies to this analogy, but the use by nearly all of the female soloists of the black church choir for background vocal support does somewhat apply, like that used by Linda Ronstadt in "Cry like a Rainstorm, Howl like the Wind" or by Madonna in "Like a Prayer."  Well, on second thought...maybe not.)

In many songs, however, these groups have taken the "elevation of the supporting instruments" to a fault, as the sheer quantity of music from "Progressive Rock" is often times overwhelming at first pass.

I personally experienced this back in the early '70's.  After growing up in Phoenix with a steady diet of Country/Western (Marty Robins, Johnny Horton, Sonny James, Ray Price, Johnny Rivers, Patsy Cline, Johnny Cash, Floyd Cramer, Red Solvine, Loretta, Tammy, George and Merle), plus a liberal supply of Folk/Rock (CS&N and Simon & Garfunkel), I found it hard to fully appreciate such masterpieces as "Trilogy" or "Karn Evil 9-First Impression" by ELP, or even "Running Hard" by Renaissance.  Luckily, my running mates in high school and college were "Progressive Listeners."  Back in Kentucky, I remember high school bud Steve Martin pointing out supporting performances which I was completely overlooking.  It was the same at college in Indiana, where mates Bill Webb and Raymond Lee Larson were constantly pointing out sections of music which was totally overlooked by my "Live Performance" focus.  These were individuals who searched their music for quality performances, and didn't just accept songs at face value.

This is another key point.  Accepting a song at face value doesn't simply mean accepting the song as the producer constructed it.  In our imperfect audio world, the equalizer settings are more often at fault in the bad presentation of a song than any other factor.  And what's a perfect setting for one song is likely to be a bad setting for another song, which is why I get such a laugh out of individuals who obsess that no one dare change the "perfect" settings for their sounds system's equalizers.  These idiots have no clue whatsoever, as I have thanked so many good people who have revealed a different view of a song with a couple changes to my equalizer settings.  It's much the same way that listening to a song through a fine set of head phones often changes everything completely.

"Progressive Listening."  It's listening to a song as the song was likely put together in the studio, one track at a time.  It's the key to becoming a sophisticated listener.  Try it the next time that you feel that you don't like a song, but you don't really know why.  Understanding is simply a matter of focusing on each musician's performance, and more times than not, you'll come away with an appreciation for the song.  I personally use this technique to find musical 'common ground' with my 21 year old son and 24 year old daughter, and I'm often surprised by the high level of talent present in the "supporting" work in today's music-even when the lead stuff is talent challenged.  I just like being able to compliment something in my kid's music, as it encourages further positive interaction between us.

Lastly, a word of warning.  If you love a particular song at first listening, please don't apply this critical listening technique.  Just as you don't want to over analyze your soul mate, if you love the song, just go with it.  Unfortunately, after decades of critical listening, I personally cannot resist applying "Progressive Listening" to everything I hear.  It's a curse, as I find myself discovering "poor" elements of songs which I was much happier not being aware of.

PS:  If I'd given this page the title "In Praise of Progressive Rock" it wouldn't have received three total hits, so I chose to do my hero worship in a little more thought provoking fashion.  And BTW, 'MOR' stands for Middle of the Road, which I'm proud to be.