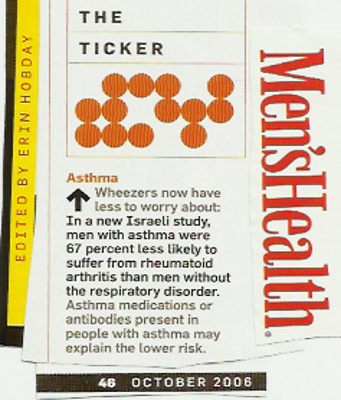 A report saying asthmatics are at decreased

Now thanks to the art of data mining,

Which is news which will surely excite us. 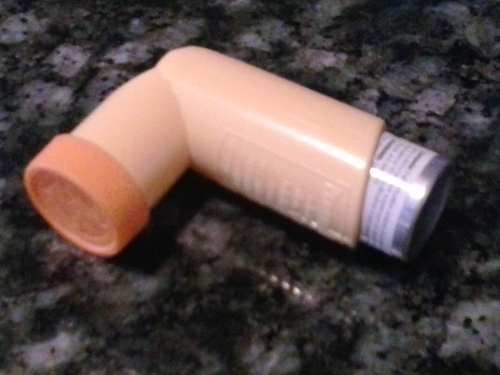 But let’s put aside practicality.

What if I could change my reality?

Swap my asthma for arthritis some how.

But after decades of coughing up phlegm,

It’s still hard to say: “Let’s trade with them,”

Cause it means that I’d be hurting right now.

But as is the case so often with me,

There is present here a complexity,

Which is giving me this furrowed brow.

For my marital status is single.

But there’s a word which makes me tingle.

It's the scariest sound in the world..."Meow." 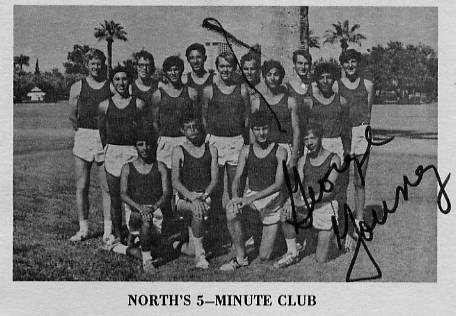 Running the half mile on Friday afternoon.

660 down, the straight was coming soon.

And this wasn't just another two school meet.

But my lungs were too tight for an all out sprint.

And I sure didn’t want another week spent,

On friggin’ Marax, so I cruised and got beat.

The cure’s worse than the ill, when Marax taking.

I’d bounce off the walls, hands would be shaking,

And attempts at clear thinking were tough.

And it wasn’t ideal for dating a girl,

When foreplay began with an inhalant puff. 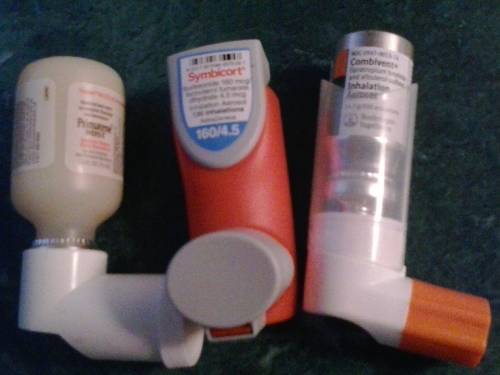 VERSE 4 - Back to the present

You see cats are my severest allergy.

So it can’t be a big mystery

Why “No Dating Cat Owners” is the rule.

But for a man in the group 'middle aged',

Who has hopes of one day getting engaged,

I’ve nixed more than half of my dating pool.

If you were asthmatic you would really,

Have a clue where my head is at.

It sucks meeting a gal I can’t resist,

Just because she says she’s got a cat.

But it’s a shame that my stupid male pride,

Keeps the cause for this snub hidden inside.

But the word ‘asthma’ I’d rather not mention.

So as you read this wheezer’s lament,

But such matters demand my attention.

Let me take a second to address the handling of an asthma attack by Brad Pitt's character in the 2013 movie World War Z.

But first, my hat's off to cast and crew of WWZ for attempting to handle the subject of an asthma attack with dignity.

The problem as I see it is, if all you know about dealing with an asthma attack is what you saw in WWZ, pulling the car over and getting into your kid's face is probably going to scare them into a much worse attack.  Generally speaking, it's better to instead just calmly say:

"Try to relax yourself, knowing that you're gonna get through this, and breathe in and then push your breath out through pursed lips, like you're trying to play the trumpet."

This is in stark contrast to the movie's recommendation of fast and short shallow breathes.  Granted, maybe that is the best course of action when the airways are restricted to the point that death is eminent, and the sufferer's fingernails and lips are turning blue.  I'm not arguing with that.

My concern is that this is NOT the best course of action in the other 97% of asthma attacks where the Grimm Reaper isn't actually on standby.

I'm kind of ashamed to admit that the 'reaper' reference just brought to mind one of Brad's earlier movies, Meet Joe Black, where Brad actually plays The Grimm Reaper.  No kidding, you should see it, as it's a better movie than WWZ...imho.

Anyway, my personal experience is that chest tightness brought on by asthma is almost always best dealt with in the calmer practice of full breaths exhaled through slightly pursed lips.

Back in the early 1970's, the Soviets discovered that the back pressure produced by exhaling through the slightly pursed lips forces the bronchiole tubes open a bit longer, providing for a better breath due to more complete air exchange.  They used it in distance running, which is where my interest was at the time, but any aerobic sport would benefit.

OK, that's my two cents worth.  And again, if the lips and fingernails are blue, you might try it Brad's way, and definitely head to the ER.

Finally, a great web resource for asthmatics and their friends and families is asthma uk at: